I have reached a certain conundrum with my current work in progress. Should I use traditional races? There are plenty of epic fantasy and sword and sorcery books that use the traditional elves, dwarves, gnomes, etc.

At first I started to avoid this pit fall, only to realize that I had created several races, all of whom just turned out as analogues for the traditional ones.

Using them is not a bad thing. When you mention dwarf, or elf, or even gnome, you create a very specific image inside the head of a reader. And movies like Lord of the Rings and The Hobbit have only helped in that regard.

At the same time you run the risk of becoming crystallized into what those races can and cannot do, and what those races are and are not. That risk does not change regardless of where you first encountered these different humanoid creatures. Only the details do. Elves from Tolkien and elves from a popular game like Dungeons and Dragons have some very distinct differences, and yes both are amazing in their own way, but with those archetypes stuck in your head it can be difficult to own them.

It brings up questions I am not sure I have all the answers to. Elves from Tolkien are pretty much divine beings that live until killed (or at least that is the way it seems).  Do I want that?

The elves from dungeons and dragons can see in the dark, and are magical in nature along with a myriad of other special qualities. Do I want anything like that? Do I want o use part of each? How would using anything like that change how these creatures would act and interact within the story?

My biggest problem with changing the traditional names and going with my own creations that are similar, is that having so many could get confusing to the reader and that I would lose some of that imagery that these words conjure in the minds of reader.

And in all honesty I want some of that imagery, and some of that tone. I want to tap into that feeling that someone gets when they read about an elf, and their mind goes back to that first time they EVER read about or saw an elf.

It’s kind of a cheat, but it is a cheat that all writers use. When a writer describes someone as looking

like Santa Claus a very specific image pops into your head. If a writer describes someone as looking

like Santa Clause, if he were Hell’s Angel, then a similar, and yet very different image will pop into your head.

It is about my biggest concern. If I use them and change them will I end up changing them too much? Would I end up with sparkly vampires that aren’t vampires? And if that is the case then why even use the word elf or dwarf at all? 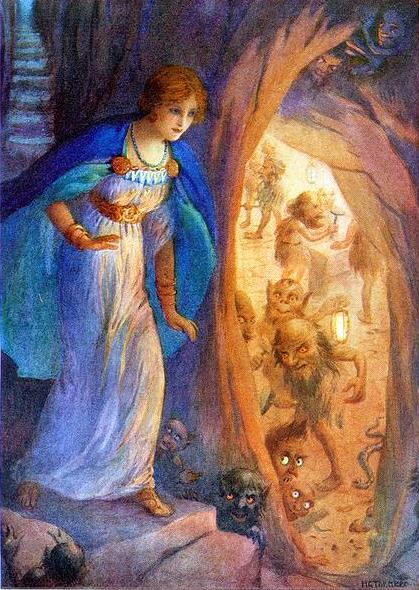