Book Review: The Cat, The Crow, and the Cauldron: A Halloween Anthology

So it is about that time of year where many of us ask to be scared. We want chills and that feeling of something ghoulish creeping up on us out of the corner of our eye. Movies and television can try to give us that haunted feeling, and they have their moments, but nothing is quite as good as a scary story.

This short story anthology gives us more than one story, it gives us nine. Short story anthologies are underrated. I’m not sure why. Maybe people think that they need an entire novel to enjoy a good story? Those people are wrong. Drop them. You don’t need that kind of negativity in your life.

With well crafted short stories we get a tight narrative and quality characters in bite size chunks.  And this anthology delivers quality writing and addictive stories that will keep you turning the page.
In a lot of ways The Cat, The Crow, and the Cauldron is like a bag after you have been out trick or treating. You go through your bag and find that there is some candy you like, some you will eat only when there is no other candy left, and some you don’t like at first but once you try it is some of the best candy you will ever have greedily devoured all in one afternoon (Not that I do that, well maybe, just once. Okay, it was yesterday but that’s my business. And yes I regret it, but only for a little while).

To continue this metaphor (or maybe just to grind it to dust after beating it to a pulp?) there are stories with happy endings, depressing endings, some are slow to start, and others end leaving you wanting more. But I need to be clear, none of this is bad. Not every story is for every taste and these nine stories run the gamut. Messages form the past, ghosts, a demon apocalypse, psychological horror are all present. Better yet I never once felt as though I were reading someone’s rehashed vampire/werewolf fan fiction (not that there is anything wrong with it if that is your thing but I am tired of it) or poorly edited Lovecraft Tentacle Erotica (yes that is a thing, no I will not provide a link).

So to sum everything up: Halloween is Saturday and instead of watching the same movies, the same TV, or reading the same scary stories you have been reading since you were a kid go out and grab this book. It will give you something new to be afraid of in the dark. You’ll think twice when you are at the museum, second guess what you know about history, and wonder if that strange thing in the sky is a portal the herald’s an end of days through a gnashing of teeth.

And for the price (FREE!) you can’t go wrong. 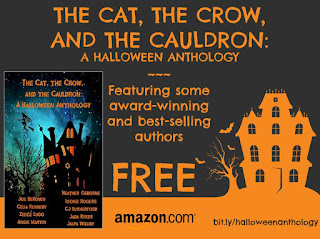 The Cat, The Crow, and the Cauldron


A strange and wonderful collection of Halloween stories, ranging from paranormal romance to horror.

Joe DeRouen’s “Good Fortune” teaches us a valuable lesson about why you should be very careful when you hold someone’s fate in your hands. It may come back to haunt you, just as it does for Grimsley Harkness, who dares to wish for more than he deserves.

Celia Kennedy’s “Nothing Scares Me” takes readers on a test of endurance. Lost in the Florida Everglades, Ardith Deblois, wife, mother and intrepid adventurer, fights for her life. Enveloped within the humid swamplands is a perilous maze full of obstacles and adversaries. Which is the greater impediment, the humans that hunt her or the deadly animals and poisonous plants she hides amongst?
Can she fight through fatigue and dehydration to save herself? Nothing Scares Me. True or not?

Zeece Lugo’s “Five Stories Up” finds us on October 31st, 1966, and night is falling over the city. Below, the groups of little ghosts and goblins stream in and out of the front stoops and basement bodegas, running, laughing, white blankets flapping in the wind, their candy treasures tightly held in hand. But above, in the dark rooftop of Sonia's building, something pale and evil watches her, and beckons...

Angie Martin's "Sold" follows a paranormal team as they investigate the home of a serial killer for their live Halloween night televised show.

In Heather Osborne's “Will You Remember Me?” past and present collide when ghosts from witch trials of long ago come to life. It's up to Sierra to lay things to rest.

In Leonie Rogers' “Roast Pumpkin” Anna discovers that going trick-or-treating in her new home town is more of an out-of-this-world experience than she'd ever imagined.

CJ Rutherford's “Treaters” tells the story of Jaz. Who would believe the world would end on Halloween night? Can Jaz, a retired U.S. Marine, battle loss, grief, demons, and loneliness, to survive the end of the world?

In Jada Ryker’s “Dead Eye” Alex takes Marisa to an unusual Halloween party in an isolated Kentucky community… with a murderer ready with deadly tricks, rather than treats.

In Jalpa Williby’s “Beauty and the Beast” Kelsey’s entire family perishes in a fire on a dreadful Halloween night. Overcome by grief and guilt, she decides to end her pain once and for all. Will the mysterious stranger be her savior, or will he ultimately cause her tragic demise?

Jesse Magnan's Blog of the Lance: Morgion: Bright Eye, Winter Night 2, 354 AC “Withdraw to the lift!” Chai snapped as he viewed the grotesque and diseased faces of the towe...
Posted by Jmags at 12:09 PM No comments:


As a writer I am constantly selling myself. Not literally mind you, though becoming a fetish escort for Devotees may actually pay better. I am trying to convince you that you should be interested enough in what I have to say and how I say it that you want to buy whatever story I am currently shilling, that ‘you’ is constantly  changing.

Sometimes my target is an editor, sometimes it is direct to readers, and sometimes it is another project that has my attention.  In all this selling of myself and creating a (I shudder as I hate this phrase) brand I often come across writers asking whether or not they should use a pen name.

My stock answer was that authors use them for various reasons but they are not for me, I wanted all the credit and ridicule I was do.  But then I decided to do something a little different. I decided to try a pen name. It was for a genre I had never thought of writing (which I will not share here, and no I am not sharing the name either) and I figured it would help hide my name and gender and anything else that may cause others to discriminate against me writing in one particular genre.

It was a mistake. Not the taking of a pen name. But trying to craft and create TWO careers. Twice the social media output, twice the blogging, twice the writing.  I was sick of it after four weeks and I had barely completed any of the tasks I set out to do.

Having a second name to write under is easier and harder for established authors. Rowling and King don’t have to go out and look for an audience for the books that are published under their name, so they can take time to craft an identity with their pen name.

And it makes sense to do so. Rowling wrote a mystery book a while back under a pen name, because she didn’t want people to buy and judge it either to lightly or too harshly based on previous work. That is why it was such a shame when her nom de plume was exposed.

Fans (and I say this rabid fan of so many things) can be a blessing and a curse. We get mad when the creators of content that we love go far afield, and we get angry when the content get stale and repetitive, all while refusing to admit that we the fans may in fact be part of the problem.

All this boils down to me saying I think pen names are a great idea, but only at the beginning of a writing career as the only name you write under or at later date when you have a rabid fan base to please/anger.

But if you are at the beginning of your career why bother?  Now is the time to be plastic! Explore every genre! Mash genres together! Write that inhuman science fiction erotica that a friend in college challenged you to write so long ago!

Speaking of which I have to write that erotica still, but how do you describe an amorphous green blob and the man it loves as an erotica?
Posted by Jmags at 12:37 PM No comments:

When it comes to writing I have figured out all about priorities. Now I don’t mean life priorities. Family should always have a place, and having the ability to pay your bills, and be healthy. But rather I have finally figured out my priorities in what to write.

Some people have writers block. I have the opposite problem. I have a list of over one hundred different novels, short stories, plays, screenplay, etc. So while some struggle with having nothing to write, I struggle with wanting to write every damn thing at the same time. And for a long time I really did try.

That was foolish. That was incredibly foolish. I would get overwhelmed and then I would write nothing. Or I would end up putting my writing off for a day or two and try to write a massive word count in a single day which would result in becoming frustrated when something came up and I couldn’t even get half of my goal reached.

This is an issue. Well this was an issue. It took soul searching and reading one or two blogs by writers I respect for me to finally get my shit together.

I have even adopted slow blogging, a concept Anne R. Allen promotes. After all what kind of writing do I wish to do? The blog should be in service to my writing, not the other way around. That is unless my goal is to become a blogger. And in all honesty it is not.

Now I can focus on one item, get that done and then focus on the next. So this month I am focusing on a novel. A fantasy novel that will take place in a world I have been working on for longer than I care to admit.

Next month it will be on something else, plus a thirty day break from the fantasy novel so I can go back and edit it anew.

I will also look for a way to make this blog a bit more focused. A bit more relevant to what I am writing. It took me a long time to get to this point in my attempt at a profession, a point where I have enough insight to see my bad habits and how they hurt me. Applying this to my blog should be easy enough. Or not.

Only time will tell.