There is something innately creepy about a ventriloquist’s dummy. This tiny figure carved of wood then painted and dressed to resemble a human. It is not the fact that it looks a person. There are many inanimate things that look are designed to resemble humans. I’m sure the first thing that come to my mind are the bronze and marble statues by the Ancient Greeks and Romans or even more current creations .

What disturbs me the most about these type of dummies is how they go from fully animated to lifeless. While you do need someone to bring the dummy to life, it is that we don’t really see the hand going in the back of it. SO from my perspective it looks like this creature is sitting on the performer’s lap.  Once the performer has left the dummy remains the same. Its dull eyes staring off into the distance. I almost expect it to move. And if it were to move I would do what the kid from Chucky should have done and pull that damn thing apart at the seams.

This aversion is not entirely my fault.  My dislike is influenced by exposure to puppets and dolls coming to life at a young age and I am not referring to Teddy Ruxpin.   Though if you pull off his fur and play his tape recorder as the batteries die he is a nightmarish nightmare (and sometimes you don’t even need to do that).

No, I am thinking of at least two televisions series, a movie, and a book.  My first encounter with the disturbing nature of dolls would be Poltergeist. Not that piece of shit and unnecessary remake, but the original. I watched it around the same time my younger brother was born so I was about eight.

There are many movies an eight year should never see, and that one is right up there. I remember it making me nervous around this clown thing he had, that is how messed up in the head that movie made me.  The two television series were Are You Afraid of the Dark and Goosebumps.   Both felt it necessary to have episodes about those soul stealing demon spawn, and as a result I am wary. What the book is should be apparent, but for those who did not realize it Goosebumps was a series of books before it was a television series.

As an adult I figured out that those are based on old episodes of the Twilight Zone, and even that may be based on something even older.

And I refuse to even acknowledge the new movie that is supposed to come out with Jack Black.

I wouldn’t call my dislike a phobia, or even a fear. It is in the same vein of when you pass a cemetery and know that zombies do not exist, but I’ll be damned that at least half the population of this country has not had the fleeting thought of what they would do if zombies rose from the grave.

That is me and dummies. I know they are not and could never hurt me. But should one suddenly gain life then I am more than ready to crush that thing into so much sawdust.  Or plastic dust. I don’t even know if they are still made out of wood and I don’t really care as long as I don’t have to share a room with one. 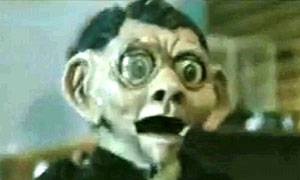